No Damages for Delay Clause? How About Damages for a Cardinal Change? Steel Erector Claims its 301 Day Delay Constitutes an Abandonment of the Subcontract and CA Fed Court Agrees. 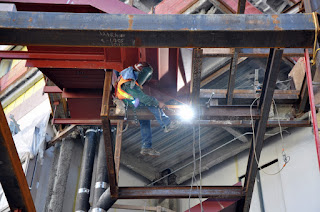 Sauer Incorporated (Sauer) entered into a design-build contract with the U.S. Army Corps of Engineers for the design and construction of the Operational Readiness Training Complex at Fort Hunter Ligget, California.  Sauer then executed a subcontract with Agate Steel, Inc. (Agate) for the structural steel (install only) scope of work. The subcontract required that Agate provide all labor, materials, equipment, and tools required to complete the ‘Structural and Miscellaneous Steel (Erection)’ scope of work.  The subcontract also contained a ‘no damages for delay’ clause that provided Agate’s sole remedy for a delay on the project was a commensurate extension of time and Agate waived any rights to financial claims based upon delay.

The scope of work required Sauer to provide structural steel to Agate in accordance with the plans and specification through Sauer’s fabricator. Additionally, the contract specifically called for steel stairs to be delivered fully assembled and ready for final install by Agate. The subcontract also contained references to the project schedule with a defined duration of 121 days for Agate’s work.

During the execution of the work, Agate experienced numerous delays and disruptions claiming significant revisions to the contract drawings resulted in changes to the steel fabrication and erection sequences; that Sauer’s fabricator delivered hundreds of non-conforming pieces of steel to the project which then required field modifications; the contract documents underrepresented the amount of steel clips required for the work by 4,000 pieces; and the steel stairs were delivered in pieces which the required labor intensive field fabrication.  As a result of these delays, Agate’s installation duration ultimately was 422 days, a 301-day delay.

As a result, Agate filed suit against Sauer for: 1) breach for outstanding contract balances plus unpaid change orders in the amount $649,739; 2) breach for delay and disruption in the amount of $698,253 in extended field & office overhead plus attorney’s fees; 3) unjust enrichment for the reasonable value of materials it had not been paid for; and 4) breach of good faith and fair dealings for lost revenues, profits and opportunities for the extended duration it was onsite.  Sauer moved to dismiss the second, third and fourth claims.

The Court began its analysis of Agate’s claim for delay and disruption by identifying the subcontract did include a valid 'no damages for delay' clause as allowed in federal contracting.  Agate argued that the kind of delay it experienced throughout the project was not within the contemplation of the parties when the contract was formed, and the ‘no damages for delay’ clause should not be enforceable. The Court pointed to Sauer’s inability to properly schedule trades, unwillingness to process change orders, and numerous design changes as detriments to Agate’s efficient work flow and found them as a plausible basis to seek relief for a delay and disruption claim.

The Court also addressed Agate’s argument that the ‘no damages for delay’ clause is unenforceable because through its actions, Sauer abandoned the subcontract.  Agate points to California case law that states, “[P]rivate parties may impliedly abandon a contract when they fail to follow change order procedures and when the final product differs substantially from the original." Amelco Electric v. City of Thousand Oaks, 27 Cal. 4th 228 (2002).

In its review of whether the contract was abandoned, the Court again pointed to the facts that the subcontract stipulated Sauer would furnish complete and correct steel, but numerous field modifications were required due to design changes and incorrectly fabricated materials.  The Court further acknowledged the 4,000 steel clips installed not depicted in the contract documents, stairs pieces that arrived loose and required field assembly contrary to the subcontract, and Sauer not adhering to the contractual process for change order work.  Agate alleged that those "foregoing, cardinal changes to the Erection Subcontract and material departures from the reasonable expectations of the Parties, at the formation of the Erection Subcontract, constitute abandonment of the Erection Subcontract."

The Court found the totality of these allegations was sufficient to show the contract had been abandoned and the ‘no damages for delay’ clause was not enforceable.  The Court allowed the claims to proceed beyond the pleading state without a determination of damages.

Based upon the finding that the subcontract was abandoned, the court then found Agate’s third claim of unjust enrichment in quasi-contract could precede because no contract existed between the parties and relief could be sought in equity.

The fourth claim of breach of good faith and fair dealings was dismissed.