It's no secret that construction disputes frequently involve one or more expert witnesses on each side. Our Division 1 panel -- Joshua B. Levy of Husch Blackwell LLP and Bill Manginelli and Mary Jay Torres-Martin both from Trauner Consulting Services, Inc. -- offered some best practices for those expert engagements starting at the initial meeting through the expert's trial testimony.

Using a creative presentation approach (and apropos for the upcoming 2018 Winter Olympics), Joshua, Bill, and Mary Jay set the scene for a dispute between Olympic Mechanical and Bobsled Contractors over the mechanical subcontractor's claimed costs for extra work and delay.  Joshua served as counsel for the defendant Bobsled Contractors and Bill was Bobsled's expert.  Over the course of three acts marshaled by Mary Jay, Joshua and Bill held mock meetings to discuss the claims, exchange of documentation, initial opinions, written reports, and preparation for depositions and trial. The pair offered important and practical reminders to ensure the expert testimony will meet the requirements of the rules of evidence and civil procedure.  As a coda to the presentation, Eric J. Meier also from Husch Blackwell LLP, played the opposing expert for Olympic and faced stiff cross-examination from Joshua.  This mock cross-examination illustrated the worst case scenario if best (or even good) practices for preparing experts are not followed.
Posted by Katharine E. Kohm at 8:57 AM No comments:

The Baker Court first recounted the direct avenues for collecting on a construction project when payment is not made in the regular course: "[A] mechanic's lien may be available, and in connection with public works projects, a payment bond is statutorily required given the unavailability of a mechanic's lien in such projects."   That said, "[d]epending upon the equity in the property . . . a mechanic's lien may be insufficient (especially if a project has been financed with a mortgage placed on the property as a first lien)." Even with these direct avenues along with filing suit, insolvency of the parties in the project chain can thwart any collection efforts of the lower tier contractors.  In addition, contractual language, for example a pay-if-paid provision, too can arrest an unpaid party's effort to be paid. The Baker Court considered the requirements for applying such provisions. In Baker, the general contractor-subcontractor contract stated, in pertinent part, that:

After disposing of a burden of proof argument raised by the subcontractor, the Baker Court resolved the contract interpretation question. It examined the caselaw and observed that where the provision does not explicitly "creat[e] a condition precedent to payment" the courts will construe the provision as "setting the time of payment" rather than establishing a defense to payment. However here, the contingency was explicit and moreover the contract provision also put the risk of insolvency explicitly onto the subcontractor: "The Subcontractor expressly accepts the risk that it will not be paid for the Work performed by it if the Contractor, for whatever reason, is not paid by the owner for such Work. The Subcontractor states that it relies primarily for payment for Work performed on the credit and ability to pay off the Owner and not of the Contractor[.]"

In light of the foregoing the Baker Court held that there was no ambiguity in the terms and therefore the contract's pay-if-paid provision would be enforced as written.  The court summed up the reality of working in the construction industry (and frankly any industry): "It is clear that the defendant [contractor] took advantage of its superior bargaining position in this contract; the plaintiff [subcontractor], however, seemingly made a conscious decision to [get the job by] sign[ing] a contract containing this risk-assumption provision which, in these unfortunate circumstances, has come into play."

As an aside, observe that Connecticut's statutory prompt payment provisions do not preclude contractual pay-if-paid clauses. See Conn. Stat. 42-158i et seq. 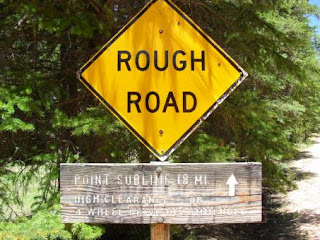 In 2013, The National Park Service (NPS) contracted with Caymus Corporation (Caymus) in the amount of $292,300 to furnish and install road signs within the Grand Canyon National Park.  Caymus was prepared to furnish bonds for the project in accordance with the Miller Act, but the NPS told Caymus bonds were not required as it was services contract, not a construction contract.  Caymus then subcontracted the actual sign fabrication and installation activities to Zumar Industries (Zumar) in the amount of $92,793.  In March 2014, Zumar delivered sign panels to the jobsite and NPS immediately identified deficient and missing sign panels which lead to a multi-month discussion among the parties regarding the sign work.  On June 30, 2014, Caymus submitted a payment application to NPS where it certified the sign installation work was 100% complete.  Caymus issued $59,278 in payment to Zumar, withholding $35,632 pending satisfactory performance.

In response to Caymus withholding its contract balance, Zumar entered into discussions with NPS to recover the funds, even proposing a series of joint-checks for work completed at one point.  Caymus would not agree to any payment terms unless Zumar warrantied the sign panels or NPS agreed to accept them as is.  In December 2014, NPS issued a punch list for the sign scope of work that included twenty-two signs in need of repair with an additional three that were missing.  Zumar completed the punch list work at a cost of $15,000. Earlier in September, Zumar filed the present breach of contract claim against Caymus, seeking $35,632 and prevailed in compulsory arbitration.  Caymus appealed and Zumar was awarded summary judgement for violations of state and federal prompt payment laws which constituted a material breach of the contract. Caymus again appealed.

The Court began its analysis by defining the purpose of the Arizona prompt payment act (PPA) as, “a framework for ensuring timely payments from the owner to the contractor and down the line to the subcontractors and suppliers whose work has been approved." Stonecreek Bld’g. Co., Inc. v. Shure, 216 Ariz. 36, 39, (App. 2007). The Court then presented the competing arguments. First, Caymus argued that federal agencies are not “owners” within the context of the PPA. Conversely, Zumar argued that the provisions of the PPA are not dependent on who the owner of a project is, but rather the PPA applies to the contractor-subcontractor relationship.  Furthermore, Zumar argued that the PPA does not impinge upon federal supremacy because “it does not regulate, compel, or otherwise apply to the federal government.”

In its analysis, the Court examined the contractual relationship between Caymus and Zumar within the language of the PPA.  The Court found Caymus is a “contractor” because it has a "a direct contract with an owner to perform work under a construction contract” as the PPA defines.  Zumar is a subcontractor because it has a “"direct contract with a contractor...to perform a portion of the work under a construction contract" as the PPA further defines.  The Court then presented the PPA’s definition of an “owner” as a “person; firm; partnership; corporation; association or other organization; or any combination of those previously listed.”  The Court points out that absent from the definition is “any form of government, government agency, or political subdivision.”  Against these definitions, the Court rejected Zumar’s argument that the PPA is a contractor-subcontractor based statute.  The Court found at the crux of the legislation is the owner-contractor contractual relationship and any payment responsibilities that may flow down from contractor to subcontractor, start with the owner-contractor relationship.  Accordingly, if the federal government cannot be an “owner” within the definition of the statute, then the statute is not applicable to lower tiers of contracts between contractors and subcontractors.

The Court next found that Zumar was not entitled to summary judgment for its breach claim based upon the Federal Prompt Pay Act (FPPA).  The Court stated that the FPPA applies to federal construction projects and requires payment from contractor to subcontractor with seven days of payment from the government.  The Court pointed to the fact that the bond requirements of the Miller Act were not required by the NPA for the project, and as a result it was not a construction project.  Therefore, the FPPA was not applicable and summary judgment should not have been granted.

In conclusion, the Court reversed and remanded the trial court and awarded Caymus its costs and reasonable attorneys' fees.

Posted by The Side Letter at 8:38 PM No comments: