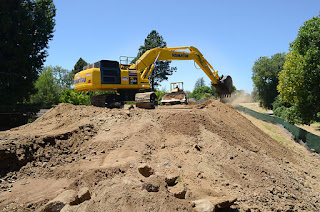 The U.S. Court of Federal Claims shows contractors once again the dangers that can exist when pricing a performance specification and the importance of giving owner’s proper notice for change orders in CKYInc. v. Unites States of America.

In 2012, the Government awarded CKY, Inc. a $6.4M contract to widen and rehabilitate the Urban Presidio Levee located in Presidio, TX.  The work required CKY to excavate existing materials in a series of benches and then infill the benches with new materials.  The contract contained a material testing specification which required the new fill material meet certain requirements.  The existing “benched” materials was further required to meet a performance specification as to moisture content and compaction rates.

During the bid process, the Government released Amendment 003 which contained questions and answers from bidders to the Government.  Within that document, the Government stated:
Furthermore, the bid documents contained a geotechnical report for the existing ground conditions, but the report included the following disclaimer:

“The data and report are not intended as a representation or warranty of continuity of conditions between soil borings nor groundwater levels at dates and times other than the date and time when measured. The [Commission] will not be responsible for interpretations or conclusions drawn there by the Contractor.”
During construction, CKY had difficulty achieving the subgrade requirements for moisture and density which resulted in schedule delays. CKY alleged at this time it was directed by the Government to place new suitable materials over the “unacceptable, non-constructible subgrade.”

In August of 2016, CKY filed a complaint in the U.S. Court of Federal Claims claiming costs for: (1) differing site conditions; (2) defective specifications; (3) constructive change; and (4) breach of an oral and implied-in-fact contract.

The Government moved for summary judgement contending CKY’s interpretation of the contract and specification were improper and CKY had not provided adequate notice of differing site conditions. It then filed a counter claim for liquidated damages.

The Court began its analysis by stating the primary issue in the dispute is the suitability of the subgrade material and CKY’s entire claim is based upon its contract interpretation that the subgrade was to be “acceptable and constructible.”

The Court first examined the Government’s assertion CKY’s interpretation of the contract documents and specifications were incorrect.  The Court reviewed the items contained within Addendum 003 and the geotechnical report disclaimer and found that a reliable contractor could not have relied on the subgrade soil to meet the requirements of the specifications.  The Court elaborated that, “When all parts of the contract are assigned meaning and understood in their entirety, CKY’s reliance on its own interpretation of the constructability and suitability of the subgrade material was unreasonable.”

Finally, the Court found that as a result of finding CKY had no basis for a claim and the project being 225 days late, liquidated damages as identified in the contract were appropriate in the amount of $1,885 per day.

In conclusion, the Government was granted summary judgement and awarded $424,125 in liquidated damages.
--------------------------------------------------
The author, Brendan Carter, Esq., is the Director of Industry Advancement & Labor Relations with the AGC of Massachusetts based in Wellesley, MA. He is a monthly contributor to The Dispute Resolver and a former Student Division Liaison to the Forum on Construction Law.