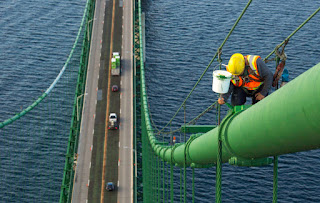 In December of 2007, specialty contractor Abhe & Svboda, Inc. (ASI) entered into a contract with the Michigan Department of Transportation (MDOT) to clean and paint certain sections of the Mackinac Bridge in Michigan’s Upper Peninsula.   The contract required the work be completed by October 30, 2009 with a liquidated damages (LDs) provision of $3,000 per day for each calendar day of delay.  MDOT’s “Standard Specifications” were incorporated into the contract which contained a mechanism to request a time extension due to delays.  The provision required that a contractor submit a claim 14 days "following the end of the delay" or "following the end of the calendar month in which the delay occurred,” depending on if the delay was weather-related or for another reason.

ASI began work on the painting project but missed the contractually required finish date with MDOT ultimately determining completion of the project on August 5, 2011.  Accordingly, MDOT assessed LDs for 644 days worth of delay.  During the course of construction, ASI contends that it and MDOT engaged in an ongoing dialogue that led it to believe, “MDOT would fairly and equitably address these issues at the end of the project.” ASI filed suit against MDOT claiming that LDs should not have been assessed in whole or in part because of MDOT’s own obstructionist actions and environmental conditions that were beyond ASI’s control.

At trial, ASI argued that 515 days were improperly assessed due to 56 days of delay being the result of MDOT’s failure to approve work task prerequisites in a timely manner, with a further 459 days of work being excusable due to: 1) site conditions being “substantially worse” than could have been anticipated; 2) additional stripe coating work outside of the original contract scope; and 3) the impossibility of working in the winter (even though winter work was allowed in the contract).  ASI also argued in the alternative that LDs should not be applied to the winter shutdown’s 362 days where MDOT could not have experienced any losses, or that LDs should be void as an unenforceable penalty for failing to be a good faith estimate of potential losses incurred.  The trial court ruled for MDOT finding that the LDs were not an unenforceable penalty and that ASI had not submitted a proper request for time extension in compliance with the contract documents, thereby waiving any right to relief.   ASI appealed the lower court’s ruling.

The Michigan Court of Appeals began its review with ASI’s assertion that the LDs were an unenforceable penalty which would make any assessment impermissible. In its argument, ASI pointed to a progress schedule it attached to the contract that explicitly identifies a “winter shutdown” of work activities. ASI contended that any calculation of LDs which included dates when work was not schedule to be performed was not an honest attempt to ascertain actual damages incurred.   The Court rejected ASI’s argument by pointing to the fact that MDOT’s damages were not based upon if work was completed on a specific day during the course of the project, but rather the impact of the total delay on MDOT’s organization. The Court stated:

“The implied logic behind plaintiff’s argument would suggest that if it had simply taken a day off work in the middle of an ordinary week, defendants would have suffered some kind of harm irrespective of the timeliness of the entire project. In fact, the opposite is true: the liquidated damages clause reflects the parties’ agreement that defendants would suffer harm if the project was incomplete after a certain date, irrespective of how or why it was incomplete.”
The Court ruled that the LD’s provision was not a penalty and was based upon MDOT’s administrative overhead for the project and concluded LDs were “clearly based on the total delay.”

The Court next reviewed ASI’s claim that MDOT’s inability to approve its scaffold plan in a timely manner caused a domino effect of other delays that resulted in the project’s late delivery.  The Court examined the term “delay” within the contract and Standard Specification and whether it refers to a discrete impediment to the work, or to the entire duration of the lateness of the project.  The Court concluded that “delay” “refers to individual, specific, discrete impediments to ongoing work.”  The Court pointed to the fact that the Standard Specification contemplates multiple delays occurring during the course of project.  The Court further muses that the only reasonable reading of the Specification would be after every individual and discreet occurrence of delay, the contractor would have 14 days after work resumes to submit a delay claim or a time extension request.  The Court found that ASI did not submit a credible request for an extension of time in accordance with the Standard Specification’s time frame and as a result waived its right to any extension of time or relief to LDs.

The Court affirmed the lower court's rulings in full.


ABHE & SVBODA INC v. STATE OF MICHIGAN, DEPARTMENT OF TRANSPORTATION, and MACKINAC BRIDGE AUTHORITY
---------------------------------
The author, Brendan Carter, is a contributor to The Dispute Resolver and a former Student Division Liaison to the Forum on Construction Law.  He is the Director of Industry Advancement & Labor Relations with the AGC of Massachusetts based in Wellesley, MA.  He may be contacted at 781.786.8916 or carter@agcmass.org.

Posted by The Side Letter at 1:34 PM No comments: