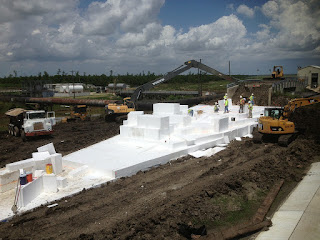 Merrick Construction (Merrick) was awarded a task order by the U.S. Army Corps of Engineers (USACE) in April of 2009 for work on a hurricane protection levee near New Orleans.  The contract incorporated the Federal Acquisition Regulation (FAR) Changes clause which stated, "[n]o proposal by the Contractor for an equitable adjustment shall be allowed if asserted after final payment under this contract."  Nearly two years later in March of 2011, USACE issued a unilateral change order to Merrick for the installation, operation, and monitoring of a temporary bypass pumping system (System).  The change order stipulated the System would be paid for on a monthly unit price basis with a formal Modification to be issued at a later time.  The pumps were delivered in July and fully accepted and operational in August.  Modification No. 3 was issued in July which included costs for the mobilization, three months rent for the System, and identified the monthly unit cost as $208,015.82.  Another Modification was issued in March of 2012 for an additional seven months of System rental and in September of that year, USACE directed the shutdown of the System.

A final Modification was issued in January of 2013 for an additional three months of System rental which contained language that stated, “This adjustment constitutes compensation in full on behalf of the contractor and its subcontractors and suppliers for all costs and markups...”  This brought the total number of rental payment to thirteen months, but the System had been on site for a total of fourteen months. During the course of the project after the pumps had been removed, Merrick believed that an accounting discrepancy had occurred, and the System supplier had overcharged Merrick and it filed suit to recover those costs.  In July of 2015, Merrick submitted its final payment request to USACE and Merrick’s vice president signed a general release which stated:

"[Merrick] hereby releases the United States, its officers, agents, and employees from any and all claims arising under or by virtue of said contract or any modification or change thereof, except with respect to those claims, if any, listed below…”

Merrick did not provide any claims or reservations and final payment was issued in the requested amount. Later in September of 2015, Merrick became aware that the supposed over-payment to the System supplier was in fact an underpayment by the USACE.  Merrick submitted a claim to the USACE in May of 2016 for a one-month rental of the System and the USACE contracting officer denied the claim citing the general release.  Merrick appealed the decision to the Armed Services Board of Contractor Appeals (Board) and USACE moved for summary judgement.

The Board begins it analysis by presenting USACE’s argument that the signature of the general release bars any claims by Merrick after the fact.  The Board points to Clean by Lucy, Inc., ASBCA No. 58432, which states a release, "abandons a claim or relinquishes a right that could be asserted against another" and “[as] a rule, a general release, whether associated with final payment or not, which is not qualified on its face, bars any claims based upon events occurring before execution of the release.” However, the Board then identified that there are exceptions to the release such as fraud, mutual mistake, economic duress, or consideration of a claim after release.

Merrick argued that the general release should not bar its claim because USACE had superior knowledge of the discrepancy in payments for the System because of Merrick's mistake.  Merrick’s superior knowledge argument was centered around the fact that before the final release was signed, but after the final Modification for the System’s rental was executed, there was a change in project management by Merrick and USACE knew that the new project manager was not involved in any prior negotiations.  Merrick further argued USACE took advantage of this because it knew of the discrepancy between rental months paid and actual rental months onsite. Merrick further argued that through the act of bringing a suit against the System supplier, USACE knew or should have known that Merrick intended to preserve a claim against it. The Board rejected the superior knowledge argument because it was highly speculative and Merrick itself was not aware of the discrepancy until nearly three months after the general release was signed.

The Board next reviewed Merrick’s argument against summary judgement because of mutual or unilateral mistake.  The Board stated that Merrick’s ignorance of its own claim is not the type of mistake that would constitute an exception to general releases and quoted J. G. Watts Construction Co. v. United States, 161 Ct. Cl. 801, 806 (1963) which stated, "where it is shown that, by reason of a mutual mistake, neither party intended that the release cover a certain claim, the court will reform the release." Merrick admits that it did not know of the claim until after it signed the release and consequently could not have intended it to be exempt from the general release.  Furthermore, the Board pointed to Mingus Constructors, Inc.,  v. the United States,  812 F.2d 1387 (Fed. Cir. 1987) that held:

"failure by the contractor to keep adequate records to at least know the source and the amounts of its cost overruns is not a sufficient reason to entertain suits on claims otherwise released, especially when the terms of the contract require such information on the mandatory release at the end of the project."
The Board found that Merrick had not provided the basic facts which established entitlement to an equitable remedy for a unilateral mistake and the general release is enforceable.

Accordingly, the Board granted USACE’s motion for summary judgement.