The Forum on Construction Law’s Beatles themed 2016 Fall Meeting - I Should Have Known Better - Construction & Design Defects & Project Delays is underway this week in Chicago.  The programming portion of the meeting commenced on Wednesday afternoon with the Advocacy in Arbitration Practicum sponsored by Division 1, The Young Lawyers Division, and the Forum Leadership Circle.  The Practicum was a great success with almost sixty attendees participating in the three hour session.

The practicum was moderated by Division 1’s Tom Dunn of Pierce Atwood  with a panel comprised of Former Division 1 Chair Buzz Tarlow of Tarlow and Stonecipher, the Leadership Circle’s John R. Heisse of Pillsbury Winthrop Shaw Pittman LLP, and the YLD’s Haim Benjamin of Becker & Poliakoff. The practicum centered on a fact pattern of an EPCM power plant project that went off the rails with a change order dispute between the owner and general contractor.  Topics covered include the arbitration agreement, arbitrator selection, information exchange, and vacatur and appeals.  Attendees were divided into Claimant and Respondent teams and mock cross examinations held with the assistance of Erin Krejci of Laurie & Brennan and Brendan Carter of Navigant Consulting, Inc. playing the roles of the owner's and general contractor’s project managers. 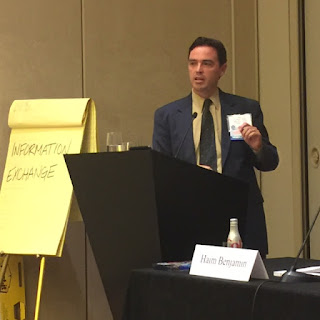