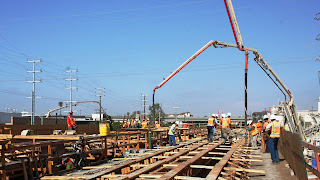 In Blois Construction, Inc. v. FCI/Fluor/Parsons, the defendant entered into a contract in 2006 with Exposition Metro Line Construction Authority (owner) to serve as the general contractor for a light-rail project that connected downtown Los Angeles with Culver City. Defendant in turn subcontracted with plaintiff for the associated underground work on the project. The prime contract allowed the owner to withhold 10 percent of the progress payments in retention and a subcontract provision allowed the defendant to withhold 10 percent of the plaintiff’s payments in retention. The retention provision in the prime contract allowed for the 10 percent retention to be waived at the sole discretion of the owner when the project was 50 percent complete.  In December 2009, defendant requested that the owner stop withholding retention and the owner agreed with the caveat that it maintained the right to resume withholding at a later time. The owner continued to withhold all previously collected retention and did so until May 30, 2014.

The plaintiff completed its contract work in 2011 by which time $500,000 of its progress payments had been held in retention by the defendant.  In 2012, plaintiff filed suit against the defendant and its sureties for 1) extra work on the project that it had not been paid for and; 2) for the balance of the retention on the contract. The suit was referred to a dispute review board by the courts for arbitration.  In November 2013 while the case was still pending before the board, the defendant released $534,909.89 in retention to the plaintiff.  The board ruled that all retention the defendant withheld had been required to be paid by September 2011 under the terms of the subcontract.  The board left the issue of penalties for late payment to the courts. The trial court decided that no penalties were to be incurred because the owner had not released retained funds to the defendant until 2014 and the plaintiff had been paid its full amount of retention by the end of 2013.  The plaintiff appealed.

The Court of Appeals of California, Second District, Division One started its analysis by identifying the language in California’s ‘prompt payment’ statute. California Public Contract Code Section 7107 states "within seven days from the time that all or any portion of the retention proceeds are received by the original contractor, the original contractor shall pay each of its subcontractors from whom retention has been withheld, each subcontractor's share of the retention received." The code further identifies penalties to prime contractors who do not adhere to this this time frame by stating that contractors who violate the code section, “shall be subject to a charge of 2 percent per month on the improperly withheld amount."

The plaintiffs argued that as a result of the change in payment terms where retention was no longer held on progress payments after December 2009, this constituted the “retention proceeds [being] received by the original contractor” and as a result defendant was required to pay the plaintiff its share of retention proceeds within seven days.  Plaintiff argues that by allowing the defendant and similarly situated prime contractors to continue to withhold retainage from subcontractors after the owner stops withholding would run counter to the spirit of the ‘prompt payment’ law.

The Court states that the defendant’s argument fails because Section 7107 is not applicable in this instance. The court points to the fact that even though the owner did stop withholding retention funds starting in 2010, it still withheld all previously withheld retention. The court then points to an alternate ‘prompt payment’ statute, Business and Professions Code section 7108.5, to discount the plaintiff’s “spirit of the law” argument.  Section 7108.5 requires a prime contractor to pay its subcontractors “not later than seven days after receipt of each progress payment, unless otherwise agreed to in writing, the respective amounts allowed the contractor on account of the work performed by the subcontractors."  The court finds that there is no evidence that the defendant did not adhere to this code section post December 2009 retention agreement and both “prompt payment” statutes “operated in tandem to ensure that there was no point at which [defendants] could receive payments from [owner] without paying [plaintiff] and other subcontractors their share of the proceeds.”


The court found that as a result of the defendant not receiving retention proceeds from the owner until at least May 30, 2014, its obligation to pay plaintiff its share did not arise until that date and Section 7107 was satisfied when it paid the plaintiff in November 2013.  The ruling of the trial court was affirmed.
------------------
The author, Brendan Carter, is a contributor to The Dispute Resolver and a former Student Division Liaison to the Forum on Construction Law.  He is an attorney and a Senior Consultant with Navigant’s Global Construction Practice based out of Boston, MA.  He may be contacted at 617.748.8311 or brendan.carter@navigant.com.
Posted by The Side Letter at 2:23 PM