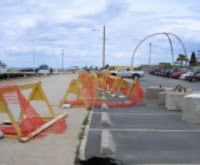 The Naval Facilities Engineering Command (NAVFAC) issued a solicitation (Solicitation) for bids for a project at the Naval Stations in Newport, Rhode Island (Newport Naval Station) on May 18, 2009 and later conducted site visits with prospective bidders in June of 2009.  The solicitation contained bid documents for the demolition of an existing bulkhead (Bulkhead, Wharf)  between two piers, removal of underwater obstructions, and then the construction of a new bulkhead and parking area to support ship berthing.  Missing from the bid documents were two reports (Report, Reports) NAVFAC was in possession of, one from 2005, the other from 2008 which both identified the Bulkhead had deteriorated to the point that it was structurally deficient and not able to support vehicles.  The Report identified that the Bulkhead concrete deck showed signs of deterioration along with the presence of a sinkhole at the adjacent shoreline.  The Report further identified that the marine H-piles and concrete encasement has significantly deteriorated and required replacement because “catastrophic collapse was possible”.

RDA Construction Corp (RDA) of Canton, Massachusetts attended the site visits but did not submit any RFI’s to NAVFAC on the condition of the Bulkhead and Wharf, despite its testimony that is paid special attention to the condition of the H-piles at the site visit.  RDA was ultimately awarded the project due to an extremely low price as compared to other bidders and NAVFAC’s estimate.  After asking RDA to confirm its pricing, NAVFAC executed a contract with RDA on October 13, 2009.  On November 18, 2009, NAVFAC furnished the Reports to RDA in response to RDA’s submitted demolition plan in which it planned to utilize the Wharf as platform to set excavators and cranes on and then demolish working outside in from either direction.  Eventually after much back and forth on this and other schedule issues, RDA submitted a certified claim to NAVFAC in the amount of $1.9 million to reflect the additional costs to change its demolition means and methods from its bid.

After a contentious project and other certified claims filed by RDA against NAVFAC, RDA’s contract was ultimately terminated for default on February 21, 2013 and on April 15, 2015 NAVFAC determined that RDA was responsible for $2.2 million in liquidated damages.  On May 7, 2015, RDA filed a complaint that alleged, among other counts, NAVFAC breached its duty to disclose material information regarding the extreme deterioration of the Wharf that was known by NAVFAC but not disclosed to RDA.  RDA further alleged:

1)   The Report concluded the existing Wharf could not support the weight of equipment, thus affecting work activities and added cost.

2)    NAVFAC was aware of the Wharf’s deterioration which could only be observed from an underwater inspection.

3)  The solicitation did not reference the poor condition of the Wharf, H-piles, and  Bulkhead.

4)  NAVFAC only advised RDA on the existence of the Report until the contract was executed.

RDA argued that as a result of NAVFAC’s failure to disclose the above, it violated the implied duty to disclose the existence of the Reports and was in material breach of the contract at the time of its signing in October 2009.  Accordingly RDA argues the termination for default should be converted into a termination for convenience.

NAVFAC responded that it had no duty to disclose the Reports and the Solicitation did include notice to inquire about the current condition of the wharf through the inclusion of the comment that the Wharf, “was likely not in good condition.” Furthermore, structural deficiencies were identified in the bid documents and should have been readily identifiable during the pre-bid site visits.  Finally, NAVFAC contended that RDA’s means and methods were inconsistent with the bid document’s direction that the Wharf was to be completely demolished before work could commence on the Bulkhead.

1)    A contractor undertakes to perform [the contract] without vital knowledge of a fact that affects performance costs or duration;

2)    The government was aware the contractor had no knowledge of and had no reason to obtain such information;

3)    Any contract specification supplied misled the contractor or did not put it on notice to inquire; and

4)    The government failed to provide the relevant information.

The Court then found that NAVFAC had indeed violated both the first and fourth elements of the test by not furnishing the Report to RDA until a month after the contract had been executed. The record showed and NAVFAC personnel confirmed that NAVFAC did not disclose to RDA the Wharf was subject to severe load restrictions until November 2009.  Therefore, the first element was met when the Court concluded that RDA undertook to perform the project in October 2009 without “vital knowledge” of the load restrictions which effected performance costs and duration. The Court found the fourth element was also satisfied because NAVFAC admitted it did not provide that knowledge until after the contract was executed.

The Court next examined the second element of the violation test and presented RDA’s argument that a bidder could only learn of structural deficiencies of the Wharf through the bid documents or through a site visit.  RDA contended the bid documents were silent on the extent of the Wharf’s deterioration and the only means to truly view it during the site visit would be through an underwater investigation.  The Court rejected RDA’s arguments by pointing to the fact that during the site investigation, there were “indicia of the Wharf’s limited loading capacity” through “orange saw horses and concrete barriers lining the perimeter of the wharf indicating that vehicles could not drive there.”  The Court further pointed to the presence of large sinkholes adjacent to the Bulkheads “suggesting the land around the Wharf was not stable.”  Therefore, despite the fact that NAVFAC was aware RDA had no knowledge of the Report, the physical condition of the Wharf during the inspection should have given RDA “reason to obtain [additional] information” about the structural capacity of the Wharf through an independent engineer’s report or underwater investigation.  Accordingly, the Court found that the second prong was not satisfied and RDA’s claim failed the test.

Despite the Court’s finding that the second element of the “superior knowledge test” was not met, thus rejecting the violation of the duty to disclose, the Court continued its analysis reviewing the third element. RDA argued that the bid documents affirmatively misrepresented that the Wharf could be used to support the weight of cranes and excavators required for demolition because the bidders were instructed to “locate demolition equipment” throughout the structure so as to not overload the framing.  The Court stated that even though RDA defined “demolition equipment” to mean cranes and excavators, the bid documents do not define that term.  Instead, the bid documents did contain the American Society of Safety Engineer's 2006 Safety and Health Program Requirements for Demolition Operations which stated demolition equipment that “each structure can withstand should be determined by the contractor.”  The Court stated this definition contained within the bid documents required due diligence by RDA to perform an engineering analysis before it placed equipment on the wharf and RDA was on notice to inquire about the structural integrity of the Wharf.

Accordingly,  the Court ruled that NAVFAC did not have a duty to disclose the Reports prior to entering into a contract with RDA and dismissed the count.


The author, Brendan Carter, is a contributor to The Dispute Resolver and a former Student Division Liaison to the Forum on Construction Law.  He is the Director of Industry Advancement & Labor Relations with the AGC of Massachusetts based in Wellesley, MA.  He may be contacted at 781.786.8916 or carter@agcmass.org.
Posted by The Side Letter at 10:55 AM