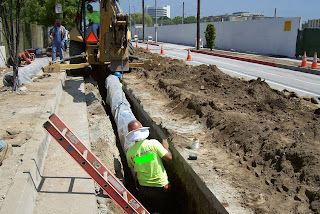 Archon Construction Co. v. U.S. Shelter centers on a dispute for the replacement of defective sewer pipe for a new subdivision in the City of Elgin, Illinois. The plaintiff was an underground utility contractor, subcontracted by the defendant-developer/builder, to install a sanitary sewer and storm water system for the subdivision.  The work’s plans and specifications, which were incorporated into the contract, contained a section entitled “City of Elgin General Notes” which required that all underground construction comply with the City’s and Illinois’s engineering and construction standards.  As part of the General Note section, there was also a requirement that all sanitary sewers shall be televised and tested prior to acceptance. The plaintiff’s proposal also specifically stated that the sanitary sewer system would be constructed exclusively with PVC pipe; the General Notes gave the option of utilizing either ductile iron or PVC pipe.  The plaintiff started installation of the sanitary sewer in April of 2005 and continued until August 2005.  During its construction activities, the plaintiff replaced three installed fittings that were not of the specified material strength at no cost to the defendant.

In August of 2005, the sewer system passed both an air and mandrel test whose results were accepted by the local water authority and the project’s engineer certified to the defendant that the work complied with the contract plans and specifications, the City’s specifications, and Illinois’s specifications. The City required that the televised testing be performed a year after installation to account for any settling that may occur.  The plaintiff engaged a third-party testing agency to perform the televised testing in early 2007 which the City reviewed, and then it performed its own televised testing.  In July of 2007, the City rejected the work and required that certain sections of the installed PVC pipe be replaced with ductile iron pipe.  The plaintiff completed the necessary repairs and submitted a bill to the defendant for the extra work in the amount of $247,432.41, which the defendant refused to pay, and the parties moved to litigation.  In 2013, this same Illinois Appellate Court overturned the defendant’s motion for summary judgment award on the plaintiff’s breach of contract claim for the extra work.  On remand, the plaintiff voluntarily dismissed its breach claim and proceeded solely on its quantum meruit claim. The trial court found for the defendant concluding that quasi-contract relief was not available to the plaintiff.  The plaintiff appealed.

The Court began its analysis by defining quantum meruit as, “an expression that describes the extent of liability on a contract implied in law (also called a ‘quasi-contract’); it is predicated on the reasonable value of the services performed.” Barry Mogul & Associates, Inc. v. Terrestris Development Co., 267 Ill. App. 3d 742, 749 (1994).  The Court then provided the four elements of quantum meruit required of plaintiff for recovery. The plaintiff must prove:

The Courts stated that the last element would be controlling, and as a result of the dispute being based upon a claim of extra work on a contract, the Court reviewed the nature of “extra work.”
By its nature, the Court mused, a claim for “extra work” establishes that a contract was present because an element of the claim is that the “extra work” was work performed outside of the scope of the original contract. Inherently, a contract must have existed.  The Court next attempted to define a line of where “extra work” is considered to be within a contract which provides a mechanism for recovery, and when “extra work” falls outside of a contractual agreement and into in the realm of quantum meruit.  In order to illustrate the difference, the Court compares the cases of StarkExcavating, Inc. v. Carter Construction Services, Inc., 2012 IL App (4th) 110357 and Industrial Lift Truck ServiceCorp. v. Mitsubishi International Corp., 104 Ill. App. 3d 357, 361 (1982).

In Stark, a concrete subcontractor claimed unjust enrichment and quantum meruit against the general contractor for unpaid costs related to placing concrete under winter conditions. In that instance, the Appellate Court held that as a result of the subcontractor specifically excluding winter conditions in its proposal, the “extra work” did not involve the same subject matter as the contract, and accordingly the quantum meruit claim could proceed.  In contrast, the Appellate Court in Industrial found that there was no quantum meruit claim available to the plaintiff.  Industrial centered around a dealership agreement between a foreign manufacturer and domestic seller of forklifts in which the plaintiff made changes to the design of the forklift that it felt would make them more attractive to the American market.  At some point, the defendant terminated the agreement, and the plaintiff filed suit claiming quantum meruit for its design work in modifying the forklifts. In this case, the Appellate Court found that the quantum claim could not proceed because the design modifications fell within the same “general subject matter” of the contract.

The Court in the present case found that the plaintiff’s “extra work” of replacing the installed sewer pipe was “part and parcel” of the original subcontract to install a sanitary sewer system acceptable to the city. “[The plaintiff’s] quantum meruit claim seeks to recover for repairing and reinstalling that very same sewer system. That work unquestionably involved the same “general subject matter” as the contract.  The Court further discounted the plaintiff’s argument that it was contracted to install PVC pipe (as per its proposal), and not the iron pipe required by the City engineer for the replacement work by stating:

“that does not change the fact that the subject matter of the contract between the parties was the installation of an acceptable sanitary sewer system; [Plaintiff’s] claims for its costs to repair and replace portions of that installed system, as required for the city’s approval, concerned that same subject matter. Thus, [plaintiff] cannot avoid the effect of the general rule that the law will not imply a contract where an express contract already exists between the parties on the same subject matter.”
Finally, the Court pointed to the fact that as part of the plaintiff’s proposal, it stated that any additional work for the project would be completed on a negotiated or time and materials basis, thus giving the plaintiff a contractual remedy for its “extra work claims.”

The Court affirmed the trial court’s judgment in favor of the defendant.