In South County Post & Beam, Inc. v. Brian T. McMahon, et al. ("McMahon"), the Rhode Island Supreme Court affirmed an "unjust enrichment" claim by a subcontractor against an owner.  The case is a cautionary tale for owners and will likely become a frequently cited case for subcontractors seeking multiple avenues for payment. 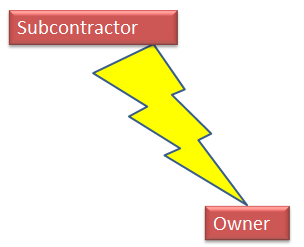 To avoid a "surprise" unjust enrichment cause of action by subcontractors, and particularly following this case, some takeaways for owners include:


Contractors, whether a general contractor or a subcontractor, who deal with difficult owners could possibly lay the groundwork for such a quasi contract claim by engaging in these activities and direct owner/subcontractor communications.  The case creates precedent for the proposition that it is not necessarily inequitable for a general contractor and a subcontractor to purposefully collaborate to avoid lawsuits between themselves so that the sub/general business relationship remains strong.

Contract Cause of Action -- Family Wins: Trial Justice found there was no express or implied contract, and therefore, entered judgment for the family.

Unjust Enrichment -- Subcontractor Wins: Despite the absence of a contract and the subcontractor's strategic decision not to sue the general contractor, the Trial Justice found that it was equitable to enter judgment for subcontractor against the family on the unjust enrichment claim.

On appeal, the Rhode Island Supreme Court first set forth the elements of a claim for unjust enrichment:

McMahon, at *8, quoting Emond Plumbing & Heating, Inc. v. BankNewport, 105 A.3d 85, 90 (R.I. 2014) (emphasis added).  Next, the Court explained that, under Rhode Island law, the causes of action for unjust enrichment and quantum meriut were essentially the same.  "'While unjust enrichment focuses on the propriety of a payee or beneficiary retaining funds or a benefit, quantum meruit's primary focus is on the value of services rendered.'" McMahon, at *8, citing Process Engineers & Constructors, Inc. v.DiGregorio, 93 A.3d 1047, 1052 (R.I. 2014). (Presumably, the Court engaged in this discussion because the proof of damages related the value of the services rendered rather than the "benefit" conferred on the family by the subcontractor's work.)

The Supreme Court framed the issue as "whether [the family] would be unjustly enriched if they did not have to compensate [subcontractor] for the value of the services rendered, and not whether it would actually be proper for [the family] to retain the benefit of plaintiff's work on their new house and barn." McMahon, at *10.  Despite precedent stating that "'[s]imply conferring a benefit upon a landowner by a subcontractor is not sufficient to establish a claim for unjust enrichment[,]" McMahon, at *11, quoting Emond Plumbing & Heating, Inc. v. BankNewport, 105 A.3d 85, 90 (R.I. 2014), the Court "balanced the equities" to determine whether subcontractor could recover directly from the family.  The following were the facts considered by the Court:

Facts Weighing Against A Claim For Unjust Enrichment


Facts Weighing In Favor Of A Claim Of Unjust Enrichment


The Court held "the trial justice was not incorrect as a matter of law in her analysis and conclusion that the third element of plaintiff's claim was met."

The family's counsel argued that this case could "render every property owner a de facto party to subcontracts executed by the general - the general and sub could substitute the homeowner as the obligor at their whim, at any time, without notice." McMahon, at *14. While recognizing this policy argument, the Court discounted it because an "unjust enrichment" claim involves a "fact-specific balancing process." McMahon, at *14. In so holding, the Court has substantially widened the "door" for such direct claims by subcontractors against owners and made it more challenging to dispose of such actions through the summary judgment process.

The Dispute Resolver editors look forward to hearing from you about this case.  Please post your comments on our blog or LinkedIn Subgroup page.  This case summary was prepared by Tom Dunn, a Partner at Pierce Atwood's Providence, Rhode Island office and Co-Editor of The Dispute Resolver. Tom can be reached at rtdunn@PierceAtwood.com or @rtomdunn.